Last summer,  a little friendly girl Linda with her parents went to the Luna park.

All the games and rides were fantastic. Linda saw the mirrors room and went there. She got lost and stayed there. Suddenly, a strange clown showed up. Then the clown started to get closer to the beautiful and shy  girl. The clown told the girl that he knows where the exit is. When they got out the clown kidnapped the girl and put her into the van. In the van there were other children too. Her parents realized that she was kidnapped. The police looked for the girl all day. The next day the strange clown arrived at the mysterious neighborhood in New York. The children in the van broke the door of the van. They were  running as fast as a tiger. The clown saw the children and started to run. They arrived in the city centre and the clown was following them. The police were there and saw the clown. The police took the clown into the jail and the parents of the children and Linda's hugged them and took them back home. 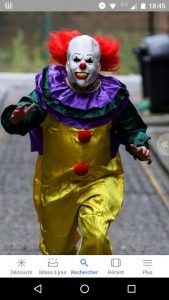